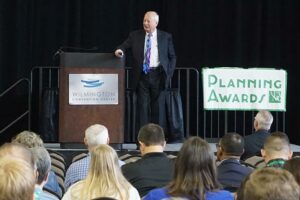 On May 31, 2017, James Schwab, FAICP, retired from the American Planning Association, where he served as the manager of the Hazards Planning Center and as editor or co-editor of Zoning Practice, a monthly APA publication. In leaving, he announced that he was undertaking a “five-point retirement plan,” in effect a “baby boomer” retirement in which he would pursue a number of personal interests that were often less feasible while he remained, in effect, the resident APA disaster expert.

He is currently planning work on a series of book projects about the 1993 and 2008 Midwest floods, while continuing to teach as adjunct assistant professor for the University of Iowa School of Planning and Public Affairs. He maintains a popular blog, “Home of the Brave,” on his personal website, and is a frequent public speaker.
His career has reflected his double penchant for both urban planning and communication. Jim is currently chair of APA’s Hazard Mitigation and Disaster Recovery Planning Division, a 1,400-member division for those devoted to addressing the intersection of planning with natural hazards and climate change issues.

Jim’s most recent major publication is Subdivision Design and Flood Hazard Areas, PAS Report No. 584, released in September 2016. That project was supported by FEMA.
His most recent previous publication was Planning for Post-Disaster Recovery: Next Generation, an entirely new version of the 1998 PAS Report by APA, Planning for Post-Disaster Recovery and Reconstruction. With a new team of contributors led by Jim, this report broke new ground in the theory and practice of planning for recovery after natural disasters, accompanied already by substantial website resources. Jim is also the author, co-author, or general editor of several other reports published by APA, as well as others published by the Transportation Research Board, and has contributed to several anthologies on planning topics such as natural hazards and climate change.

Jim is also the author of Raising Less Corn and More Hell: Midwestern Farmers Speak Out (University of Illinois Press, 1988) and Deeper Shades of Green: The Rise of Blue-Collar and Minority Environmentalism in America (Sierra Club Books, 1994). The first was essentially an oral history of the farm protest of the 1980s that challenged widespread farm bankruptcies and liquidations. The second examined what at the time was often a less visible movement within African American, Hispanic, and other minority communities, as well as white blue-collar neighborhoods, to fight industrial pollution and protect public health. He is currently developing plans for a series of books about the 1993 and 2008 Midwest floods. Learn more about Jim’s other publications under Publications on his business website.

He is a past President of the Society of Midland Authors (1997-99), and has served in many capacities including as a judge in SMA’s annual book awards contests. Jim has a B.A. in Political Science from Cleveland State University, and M.A.s in both Journalism and Urban and Regional Planning from the University of Iowa.