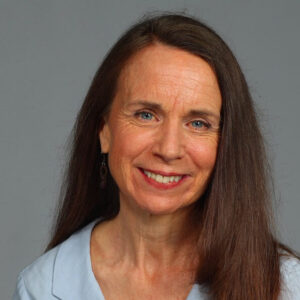 Mary Theresa Schmich was born in Savannah, Ga., the oldest of eight children, and spent her childhood in Georgia. She attended high school in Phoenix then earned a B.A. at Pomona College in Claremont, Calif.

After working in Pomona College admissions for three years and spending a year and a half in France, she attended journalism school at Stanford. In 1985, after working as a reporter at the Peninsula Times Tribune in Palo Alto, Calif. and at the Orlando Sentinel, she took a job as a features writer at the Chicago Tribune. She later spent five years as a Tribune national correspondent based in Atlanta. In 1992, she began writing a column, which she did three times a week until June 2021, when she left the Tribune.

From 1985 until 2010, she wrote the “Brenda Starr” comic strip. She plays piano and mandolin and teaches yoga. She and Eric Zorn host the annual “Songs of Good Cheer” singalong at the Old Town School of Folk Music. She has been a Nieman Fellow at Harvard University and won the 2012 Pulitzer Prize for Commentary.