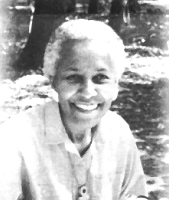 Harriette Gillem Robinet was born and raised in Washington, D. C., graduated from the College of New Rochelle, in New Rochelle, New York, and finished graduate degrees from Catholic University of America in Washington, D.C. in microbiology. She spent her childhood summers in Arlington, Virginia where her mother’s father had been a slave under General Robert E. Lee until he was thirteen. Her father’s people had been slaves in Maryland.

She is a member of Society of Children’s Book Writers and Illustrators; Society of Midland Authors; Sisters in Crime; Mystery Writers of America; and the National Writers Union. Her first two books, JAY AND THE MARIGOLD and RIDE THE RED CYCLE, are about disabled children. All the others are historical fiction. She portrays likeable children and adults, with their needs and struggles, against a pivotal time in American history.

She feels that unless we know our history, we have no perspective on life today. How can we know where we’re going, or appreciate where we are today, if we don’t know where we’re coming from? She also discovers that African Americans have been left out of history. Their stories have been deliberately changed or ignored.

She tries to have both European and African American characters in stories, to have no villains but the systems, and to thrill as well as uplift her readers.

RIDE THE RED CYCLE is in 4th and 5th grade readers; four books were named Notable Books in Social Studies; CHILDREN OF THE FIRE won the 1991 Award from Friends of American Writers; WASHINGTON CITY IS BURNING won the 1997 Carl Sandburg Award; THE TWINS, THE PIRATES, AND THE BATTLE OF NEW ORLEANS won the 1998 Midland Authors Award; and FORTY ACRES AND MAYBE A MULE won the 1999 Scott O’Dell Award for historical fiction for children. WALKING TO THE BUS RIDER BLUES was nominated for an Edgar Award by Mystery Writers of America.

Harriette loves reading–especially mysteries, knits by winter, crochets by summer, and loves pets, both dogs and cats. She enjoys camping with her family. Today Harriette Gillem Robinet lives in Oak Park, Illinois with her husband, McLouis Robinet. They have six adult children and four grandchildren.