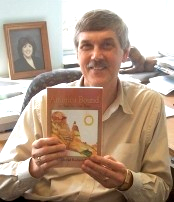 David Radavich is a poet, playwright, and essayist. Among his poetry volumes are Slain Species (Court Poetry, London, 1980), By the Way: Poems over the Years (Buttonwood, 1998), and Greatest Hits (Pudding House, 2000). His plays have been performed across the U.S., including six Off-Off-Broadway, and in Europe. America Bound: An Epic for Our Time (Plain View, 2007) narrates U.S. history from World War II to the present, while Canonicals (Finishing Line, 2009) investigates “love’s hours.” Middle-East Mezze (Plain View, 2011) focuses on a troubled yet enchanting part of our world, The Countries We Live In (Main Street Rag, 2014) on our inner and outer geographies. Radavich has written scholarly and informal essays and performed in such far-flung locations as Canada, Egypt, England, France, Germany, Greece, and Iceland. He has served as president of the Thomas Wolfe Society, Charlotte Writers’ Club, and the North Carolina Poetry Society. In 2012 he was awarded the MidAmerica Award for his contributions to Midwestern literature and scholarship. His latest poetry collections are America Abroad: An Epic of Discovery ((Plain View, 2019) and Unter der Sonne / Under the Sun: German Poems (Deutscher Lyrik Verlag, 2021).