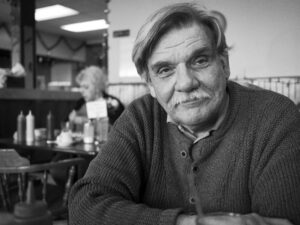 Dominic A. Pacyga grew up in Chicago’s Back of the Yards neighborhood. He received his Ph.D. in history from the University of Illinois at Chicago in 1981.  Pacyga has authored, or co-authored, seven books concerning Chicago’s history including Slaughterhouse: Chicago’s Union Stock Yard and the World It Made (2015), Chicago: A Biography (2009) and Polish Immigrants and Industrial Chicago (1991, 2001), Chicago: City of Neighborhoods with Ellen Skerrett (1986), Chicago: A Historical Guide to the Neighborhoods (1979) with Glen Holt, Chicago’s Southeast Side (1998) with Rod Sellers. Pacyga’s newest book, American Warsaw: The Rise, Fall, and Rebirth of Polish Chicago, was published by the University of Chicago Press in the fall of 2019.

From March 2018 to March 2019 he had a weekly podcast concerning Polish Chicago’s history on the WPNA-FM website. These were translated into Polish and appeared in the weekend edition of the Dziennik Związkowy.

Pacyga was a member of the Humanities, History, and Social Sciences Department at Columbia College/Chicago from 1984 until his retirement in 2017. He and Charles Shanabruch are co-editors of The Chicago Bungalow (2001).

Pacyga has won both the Oscar Halecki Award from the Polish American Historical Association for, Polish Immigrants and Industrial Chicago (1991) and the Catholic Book Award for Chicago: City of Neighborhoods (1986). In 2014 he was awarded the Miecislaus Haiman Award by the Polish American Historical Association for his contribution to Polonia Studies. In both 1999 and 2011 he received the Columbia College Award for Excellence in Teaching. In 2015 Pacyga won the Russell P. Strange Memorial Book of the Year Award from the Illinois State Historical Society for Slaughterhouse. In 2919 he again received the Halecki Award for American Warsaw. Pacyga has been a Visiting Professor at both the University of Chicago and the University of Illinois at Chicago. In 2005 he was a Visiting Fellow at Campion Hall, Oxford University. Pacyga received a Fulbright Grant and taught in the Institute for American Studies and the Polish Diaspora at the Jagiellonian University in Kraków, Poland during the 2013-2014 academic year.