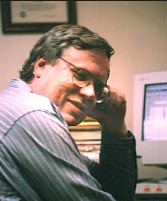 Richard Lindberg is a lifelong Chicagoan, an author, journalist, and research historian who has written and published eleven books dealing with aspects of city history, politics, criminal justice, sports, and ethnicity.

Noteworthy in Rich’s body of work is his most recently book with co-author Gloria Sykes: “Shattered Sense of Innocence: the 1955 Murders of Three Chicago Children,” published by Southern Illinois University Press in October 2006. The controversial, and sometimes chilling account of the 1955 Schuessler-Peterson case and its impact upon one insulated Chicago neighborhood has been praised by the Sun-Times for its attention to detail and Rich’s step-by-step reconstruction of unfolding events that long-ago October afternoon when three school boys went missing. The echoes of a crime that took 40 years to solve still reverberate. Rich writes a lot about criminal justice subject matter and is a past president of the Illinois Academy of Criminology. His volume, “To Serve & Collect: Chicago Politics and Police Corruption From the Lager Beer Riot to the Summerdale Scandal,” is still considered the seminal account of the history of the Chicago Police Department and was the first book about this subject matter to be published since 1887. The book began as a graduate thesis at Northeastern Illinois University, was published in hardcover by Praeger in 1991, then re-released in paperback in the fall of 1998 by Southern Illinois University Press.

Other recent titles include: “Total White Sox,” a massive 600-page hard-cover compendium of White Sox history published by Triumph Books in October 2006; “Chicago by Gaslight: A History of the Chicago Netherworld 1880-1920” (1995); “Quotable Chicago” (1996); “Passport’s Guide to Ethnic Chicago” (1997); “The Armchair Companion to Chicago Sports” (1997); and “Return to the Scene of the Crime: A Guide to Infamous Places in Chicago,” (1999), ranked number #1 on AMAZON.com’s listings for books dealing with Chicago subject matter from January-April 2000. “Return Again to the Scene of the Crime: A Guide to Even More Infamous Places in Chicago” is a 2001 sequel to the locally best-selling 1999 volume, both published by Cumberland House of Nashville, Tennessee. It is a further exploration of famous crime scenes in Chicago, recounting the history of these events with a “then and now” perspective of the colorful neighborhoods where the infamy occurred.

As a working journalist he covered community events for the Lerner Newspapers, the Chicago Tribune Northwest Suburban Bureau, and was the head writer on the Edgar Allan Poe-award winning Encyclopedia of World Crime (1990). His byline has appeared in numerous publications over the years including the Chicago Tribune Magazine, Inside Chicago, U.S.A. Today Magazine, Screen, Chicago History, and the Reader.

Over the years, Mr. Lindberg has appeared on many television and radio programs of local and national origin including A&E’s “American Justice,” “In Search of History” on the History Channel, a documentary about John Dillinger and Eliot Ness for the Travel Channel, three episodes of “Chicago Stories,” on WTTW, the PBS affiliate in Chicago, and CBS News Overnight; the History Channel documentary “The Hidden History of Chicago,” narrated by actor John Mahoney and two episodes of “Evidence,” aired on the Discovery Channel.

Mr. Lindberg is a 2001 recipient of the Frederic Milton Thrasher Award for excellence in research and reportage of organized crime and street gang subject matter. He is a member of the Chicago Crime Commission, the Chicago Press Veterans, and the City Club of Chicago. Presently under contract with the University of Minnesota Press is a memoir of his immigrant father and growing up on Chicago’s far Northwest Side. The working title of the book is “The Whiskey Breakfast: My Swedish Family, My American Life.” Also: “There’s A Sucker Born every Minute: Michael C. McDonald and the Rise of the Chicago Underworld,” is under development with Southern Illinois University Press.