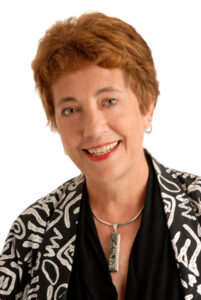 JOANNE KOCH, is professor of English and director of the graduate writing program at National-Louis University in Chicago, which includes the annual Ernest R. Wish Pulitzer Prize Lecture Series, Writers’ Week Workshops led by world-renowned writers and the annual publication of the graduate writers’ literary magazine, Mosaic. She is co-editor of the anthology Shared Stages: Ten American Dramas of Blacks and Jews, which includes the plays Driving Miss Daisy, Fires in the Mirror, I’m Not Rappaport, Medal of Honor Rag, and her own multicultural musical Soul Sisters, recently published by State University of New York Press.

Dr. Koch is the author or co-author of ten nonfiction books, screenwriter of an Emmy winning television series and the creator or co-author of sixteen plays and musicals produced around the country, including American Klezmer, recently produced at the West Coast Jewish Theatre in Los Angeles, Stardust, just published by Dramatic Publishing and winner of the National Nantucket Short Play Competition, Safe Harbor, the true story of survival in Greece during the Holocaust, Sophie, Totie & Belle, a hit off-Broadway and across the East Coast, Henrietta Szold: Woman of Valor, recipient of a Hadassah Institute-Brandeis University research grant, and Haymarket:footnote to a bombing, winner of the International Piscator Contest.

Dr. Koch previously co-authored ten nonfiction books, including the child development college textbook Children: development through adolescence and Marriage and the Family. She wrote the six books for parents and children in the widely used Families InTouch Series , co-authored the book Good Parents for Hard Times and, with her husband Lewis Z. Koch, The Marriage Savers as well as a syndicated newspaper column on family issues for United Features that went out to 200 newspapers around the country. Joanne was featured on the cover of Today’s Chicago Woman as one of 100 women in Chicago making a difference through her writing and teaching.

American Klezmer, co-authored by Joanne Koch and Sarah Cohen, with music by Ilya Levinson and lyrics by Owen Kalt, premiered at the 2004 Stages Festival, where it was praised by the Chicago Tribune and The Forward. It went on to a successful run at the Egyptian Arena Theater in Los Angeles, January 28-March 19, 2006 and will be produced in L.A. again in 2009.

Sophie, Totie & Belle, based on a fictional meeting of the late entertainers Sophie Tucker, Totie Fields and Belle Barth, co-authored with Sarah Blacher Cohen, with original music by Mark Elliott and songs associated with these entertainers, opened in New York City at the off-Broadway Theater Four on March 15, 2000 after sold-out runs in Queens, NY Theatre in the Park, Boca Raton, Florida, Miami, Philadelphia, New Hope, Albany, and the Forum Theater in New Jersey, the Drama Center in Deerfield Beach, the Wilton Theater in Ft. Lauderdale, Theatre Works in Sarasota.

Danny Kaye: Supreme Court Jester , a musical about the man who starred as Walter Mitty and Hans Christian Anderson, co-authored with Sarah Cohen, has many original songs by Mark Elliott as well as others associated with Kaye. “Danny” premiered in Albany, toured the East Coast and the Midwest and was produced in Boca Raton, Florida at the Atlantis Playhouse.

Belle Barth: If I embarrass you, tell your friends, a musical Koch developed with composer Ilya Levinson and lyricist Owen Kalt focusing on comedienne Belle Barth, dubbed the “female Lenny Bruce” and the double standard and censorship of the fifties era, premiered November 9, 2008 at Theo Ubique Theater at the No Exit Cabaret in Chicago, where it ran through December 21, 2008, recommended for a Jeff Award and on Chris Jones’ recommended list in the Chicago Tribune. Belle was featured in the August Stages ’08 Festival at Theatre Building Chicago. Joanne is currently completing a screenplay, Belle, on the life of this remarkable comic.

Joanne Koch wrote A Silver Dish, based on Saul Bellow’s short story and adapted with the Nobel Laureate’s permission, produced with Sarah Blacher Cohen’s adaptation of Bellow’s The Old System, as part of Saul Bellow’s Stories on Stage at the New York State Writers Institute in Albany and in San Diego at the Barbra Streisand Festival of New Plays starring Harold Gould. Presentations as a 2005 memorial to Bellow were done at the Egg Performing Center in Albany, New York, the Spertus Institute in Chicago and the Milwaukee Public Library.

Courage like a wild horse, presented at the Victory Gardens Reader’s Theater, the American Indian Center and at the Chicago Writers’ Bloc New Play Festival, is an adaptation of the book, the true story of Okee Chee, a Native American girl whose year in an orphanage brought her to the brink of suicide but ultimately led to a discovery of her identity and her talent as an artist. It will be performed next at the Newberry Library in Chicago.

Safe Harbor, based on one family’s survival due to heroic Greek activities in World War II, featuring Greek and Ladino music selected by world-renowned tenor Alberto Mizrahi, had its premiere at the Organic Theater in Chicago, was produced in Los Angeles and in Chicago at the Chicago Historical Society in a special performance sponsored by the Greek Orthodox Diocese and the American Jewish Committee for Ohi Day–Greek Resistance Day–and at National-Louis University in Evanston through a Cultural Fund Grant from the Evanston Arts Council, as well as at numerous schools and synagogues in the Chicago area. Safe Harbor has been translated into Greek for productions in Athens and Thessaloniki. The screenplay has been completed for a feature film to be shot in Greece.

Nesting Dolls was broadcast on local PBS stations after winning the Southern Illinois University Best Play Award and produced to rave reviews in Michigan and toured to Northwestern University, with portions excerpted in the anthology The Good Parts. Teeth, an irreverent comedy about sex and power, was produced in Chicago at the Theatre Building and in Kalamazoo, Michigan at the API Theatre, and received an Illinois Arts Council grant.

Other plays by Koch include A Leading Woman, set during the Actors’ Equity Strike of 1919, which received staged readings through grants from the Richard H. Driehaus Foundation and the Dramatists Guild Fund, Inc., Haymarket which won the Chicago Cultural Center Patrons’ Award and the Eighth International Playwrighting Contest sponsored by the Piscator Foundation and Southern Illinois University where it was produced, the musical with composer James Lucas, Hearts in the Wood, winner of an Illinois Arts Council Playwriting Fellowship and presented in Chicago at the Stages Festival, at Northeastern Illinois University and at the Acorn Theater in Three Oaks, Michigan, and Sandburg Among the Goats, which toured to midwestern schools and colleges.