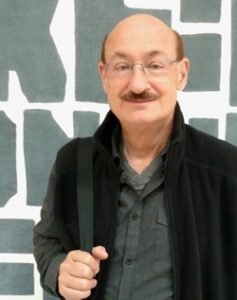 Born Milwaukee, Wisconsin, USA 1947. Studied architectural and product photography at Los Angeles’ Art Center College of Design (now in Pasadena); B.A. in Fine Art from California State University, Northdridge; M.F.A. in Fine Art from UCLA (1975). Adjunct Full Professor of Art History, The School of the Art Institute of Chicago, he teaches the History of Photography and Contemporary Theory (1985 – present). He was a photographer in the USAF (1967 – 71); worked as a graphic arts photographer in the printing industry and Hollywood special effects production (1973 – 83). He was the founder and editor of two art journals, The Dumb Ox (1976 – 80) and U-Turn (1982 – present), and has self-published numerous artist books under what would be called “conceptual photography”. In 1983, he was the First Place winner of the first Reva and David Logan Award given for Distinguished New Writing in the Field of Photography. As a critic, he has had published over 200 essays (criticism and catalogue introductions), and is the author several books of photographic criticism. Moreover, he has authored five “experimental” novels, of which Something is Crook in Middlebrook, 2012 was chosen the “Best Experimental Novel of 2012″ by nationally published writer/critic Derek Pell, editor of the online blog “Zoom Street”. For his efforts, he was elected a member of Chicago’s Society of Midland Authors.