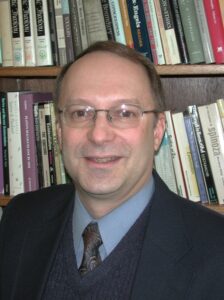 He has published two volumes in a projected three-volume biography of science fiction and fantasy author Ray Bradbury. The first volume, Becoming Ray Bradbury (University of Illinois Press, 2011), centers on Bradbury’s early life and development as a writer through the 1953 publication of Fahrenheit 451. The sequel, Ray Bradbury Unbound (Illinois, 2014), focuses on the middle decades of Bradbury’s career and his rise to cultural prominence. Eller also prepared Simon & Schuster’s 2013 sixtieth anniversary edition of Fahrenheit 451. Two of his books have been LOCUS Award finalists for best nonfiction title in the science fiction and fantasy field.

Professor Eller first met Ray Bradbury in the late 1980s, eventually developing a working relationship that lasted until Mr. Bradbury’s death in 2012. He has edited or co-edited several limited press editions of Ray Bradbury’s fiction, including The Halloween Tree (2005), Dandelion Wine (2007), and two collections of stories related to Bradbury’s publication of Fahrenheit 451 in 1953: Match to Flame (2006)and A Pleasure to Burn (2010). He is also the coauthor (with William F. Touponce) of Ray Bradbury: The Life of Fiction (Kent State, 2004), which was the first book on Bradbury published by a university press. He is currently general editor of the multi-volume series, The Collected Stories of Ray Bradbury, and an academic journal, The New Ray Bradbury Review, both published by the Kent State University Press.

During the fall of 2013, Eller coordinated the gifting of Ray Bradbury’s papers and correspondence, his entire office, working library, awards, and memorabilia to the Center for Ray Bradbury Studies at IUPUI, and is currently expanding the Center to promote public access to these materials for researchers, students, and the general public.

Professor Eller retired from twenty years as an Air Force officer in 1993; his military service included operational assignments with the Tactical Air Command and the Pacific Air Forces before duty as an English professor at both the U.S. Air Force Academy (Colorado Springs) and the U. S. Naval Academy (Annapolis).